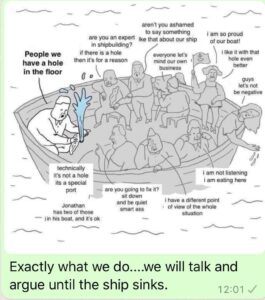 Good morning, Sir. There are naysayers everywhere. There are praise singers everywhere. And there are genuine admirers who encourage others everywhere. I believe you know that PR concept of the “half-empty bottle” and “half-full bottle,” being the same bottle but seen in different lights by different groups. Genuine perspective matters and selective perception exists. Whatever one does in life, one will attract admirers and detractors in equal measure. Let me share a story with you. I have a friend. He’s a very famous media personality in Ghana, a Journalist of the year award winner. He was once my roommate so he shared this story with me while we were at the University. He didn’t create it after he had become famous to garnish his history or story. I don’t know if he still remembers telling me this story more than 20 years ago. But I do. One day, he was reading the Reader’s Digest. I commended him for his habit of reading all sorts of material despite him being an Econs, Geography and Maths Student. I attributed his command over the English language to his avid reading habit. And he speaks fast. He smiled and mentioned my name saying, “thank you very much. You know what?” I said, no. “When I was at the …Primary School, my class teacher told me that she didn’t like the way I spoke, that I spoke English too fast.” He said he tried to change but when his father noticed the sudden change in speech, the father advised him to speak naturally, and ignore the teacher’s negativity. “Then, when I got to secondary school, I participated in debates and drama and wrote essays and won all the prizes in English. My English teacher said she liked me because of the way I spoke English.” He paused again and smiled. ” So you see, one teacher said she didn’t like the way I spoke English. Another teacher said she liked the way I spoke English.” I smiled and said “Massa, be yourself. There are several wet blankets in our environment.” This is a true story.
So my dear brother, regardless of the number of naysayers around, there are some who genuinely see both the good and the bad and react appropriately. Dr, be yourself and do what you know and like doing best.

Response 2 (from a senior medical doctor):

I believe he is only expressing his opinion which does not reflect the opinion of the mass.
In my opinion, your write ups always motivate people to think beyond the ordinary, reflect on whatever we are doing and do things that will help our generations to come. You make complex things easier and always bring out the weaknesses in the system we find ourselves for collection discussions and possible changes.
What you might not know, is that, whenever you bring out such intriguing facts for considerations, the question we usually ask ourselves here is that ” why haven’t we seen these all this while?”.
You always motivate us to think ahead and look at the best solutions that can move us forward but for those who have refused to accept changes, they will always find themselves in retrospection.
I am sorry to say that, that is another adverse effect of mediocre when allowed to breed in the current dispensation of a changing world.
Even Jesus had more haters than lovers.

The Ghanaian culture of being seen as disrespectful: To showcase what you do, and to respond to elders/seniors/authority or not?

Two of my favourite quotes

The Ghanaian culture of being seen as disrespectful: To showcase what you do, and to…